<><><>  <><><>  <><><>
When people ask me what kind of style best defines my work, I generally like to describe it as Eclectic and Transitional with a twist of the whimsical. Then again, I once told a friend that I love the look of "Bordello Chic"; a distinctively darker, sensual and more urban version of the once popular Shabby Chic style. Perhaps due to growing up around antiques and used furniture borrowed off of the streets of lower Manhattan, it was then that I cultivated an early fascination of anything old.

Antiques are so alive in many ways because of their history and time warped existence; each piece having an interesting story to tell.

Are they vessels containing heavy spiritual presences and perhaps that accounts for why so many of us can relate to a shared fascination of the vintage and antique?
<>

" Bordello Chic" also known as "Speakeasy Chic" emerged as a very popular new design trend in LA in 2010. It reflected a renewed hunger amongst trend-mongers for the decadently extravagant decor reminiscent of palatial Robber Baron homes, gentleman's clubs, not to mention bordellos, from the bygone Victorian and Edwardian eras. It encompasses aspects of the Gothic, Rococo and regency styles updated with a modern sensibility and infused with a twist of danger. The element of the dangerous serves as a reflection of a sexually provocative present day subculture masked with a veneer of old world elegance.﻿

The HBO mega-hit tv series "Boardwalk Empire" pretty much sums up the current fascination for the vintage and the dangerous and the timing of the show's emergence is certainly no coincidence. Set in Atlantic City, New Jersey in 1920's prohibition era, it has enjoyed widespread acclaim for the overall quality of the production not to mention it's historical accuracy. So if you want to get a glimpse of what an American bordello looked like in 1920, you might want to catch this show.  I will warn you that the sometimes violent content of the show is not for the faint of heart (myself included) but it is a great show and I am a big fan of Steve Buscemi.

Victoriana has a  decidedly prominent and heavier feel and is unarguably to most, an over the top style. Rich colors such as crimson red, deep purples, blues, golds and blacks were used to evoke an intensive atmosphere. Typical elements in Victorian salons included large tufted velvet furniture, heavily woven textiles like brocades and damasks along with large bullion fringes and tassels. On the walls a plethora of moody oil paintings might be mounted on red walls or purple flocked wallpaper. On the rich wooden or marble floors would be scattered several examples of exotic Persian carpeting and animal skins (Faux nowadays, please) These were just a few of the elements reminiscent of an elite and extravagantly insular world that existed from the late 1800's into the early 1900's.

Looking for Bordello Chic on a budget?  Here are a few flirty alternatives guaranteed not to break the bank: 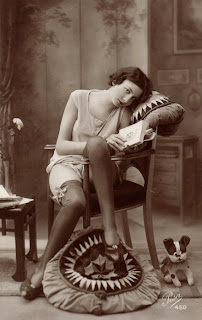 A Splattering of Haunted Hotels for your consideration.